The Future of StoryTelling (FoST)

If you ever wondered what the future of storytelling might be like, The Future of StoryTelling Summit begins to show you through some of the most advanced technology in the world. And, who’s to think that it would ever take place in Staten Island—a borough that appears to be eons away from the epicenter of the world. 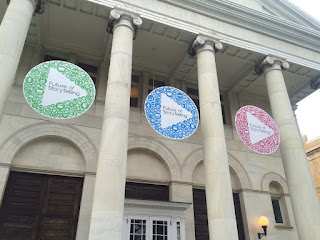 My day two volunteer schedule was lighter than on the first day, and so I had the opportunity to explore and see why FoST was such a big deal. The day began with a wicked cool opening ceremony, which consisted of William Close, an installation artist who played a harp with strings the width of the theater; and Miwa Matreyek who incorporated shadow performance with moving animation. It was interesting that sound and visual performances were selected and utilized to begin the day’s multi-sensory war on the audience’s senses. 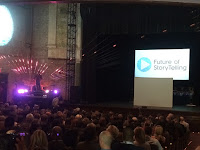 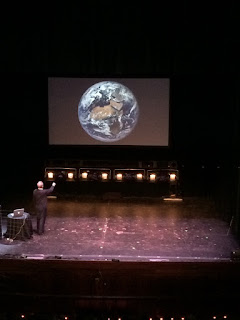 Al Gore followed these artistic performances with a discussion of his “Climate Reality Project,” a nonprofit organization he founded to explore solutions for the global climate crisis.

“Our thinking is short term and by considering the collision of our present environment with its ecological presence will help us see more clearly and act more decisively.”

Gore’s statement came after showing us a photo of Earth snapped from a satellite millions of miles away. The image was taken this past August. It was also the first image of hundreds more to come that will work in unison to develop a real scalable number of the global energy budget. My impression was that the image resolution is so large that every residential unit and manufacturing plant on the planet are captured and gathered for data analysis. 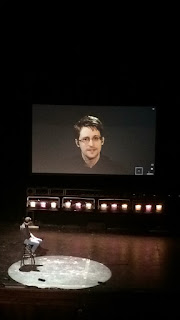 Images are powerful. What we see affects us. Pictures can shift the way we think and allow us to dig into the depths of our own humanity. Al Gore is collecting visual data to make a deep impression on our senses—to help us become global thinkers. Social ambassadors like Al Gore push our boundaries so that we can learn how to become forward thinkers on our lifelong journey on the mother ship “Earth”. If we quantify and break down our energy usage then we begin to understand our planetary energy balance and the significant presence humanity has wrought Earth.

Following Al Gore was Edward Snowden, who video conferenced in from his anonymous location. Snowden discussed how technology has changed his world when he was a suburban teenager.

“It’s the common fabric of community that connects everybody and every place together. It gives us a public commons of which we talk and trade and engage and love and live our lives everyday relying on the systems that surrounds us everyday.”

We are no longer bored with just analog toys, handheld books, friends, and the great outdoors. We are now bored online, an almost infinite space where we can learn to either be constructive or destructive.

Edward Snowden's feed was cut short due to "technical difficulties." 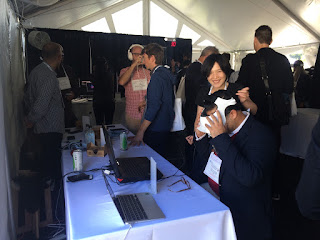 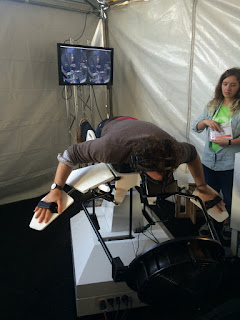 For the rest of the day I drifted amongst the crowd in my bright pink volunteer shirt. I spotted name-tags that read Creative Director of Kanye West to Chief Engineer of HTC. The Virtual Reality (VR) Tent allowed conference attendees to step out of their shoes and into poverty-ridden communities in Africa, experiencing being an NFL player at the Super Bowl, and as a bird jumping off the Empire State Building. Every VR booth had its own perspective on how our senses tune in to a different reality.

The last FoST speaker I saw was architect and “TechnologyWhisperer” Tatjana Dzambazova. She believes that our world is verging on the “age of no touch”. Tatjana works at Autodesk. They are most well known for designing AutoCAD, the 2D and 3D software that allows architects and engineers to build our built environment, digitally. Dzambazova is currently spearheading a new intuitive program called Memento, software that allows us to create a perfectly lifelike 3D rendering on our computer. Memento works by first having hundreds or thousands of photos taken of a subject or space with either an iPhone or an SLR. Memento then prompts the user to upload all the pictures into the cloud where Autodesk generates the image so that it doesn’t burn out the person’s hard drive. Essentially, the end result can be 3D printed and transformed into a perfect clone of lets say, a 15th Century American Indian Totem Pole.

Tatjana shows us the entire process on Memento. I couldn’t believe how quick and painless the process is to render a duplicate item. I can envision Madame Tussaud wax museum suffering from a 3D print museum spawned from Memento. Additionally, the program can also render more complex compiled images like an abandoned and graffiti’d up building outside of Detroit.

Astoundingly, Memento will be a program for professionals and the consumer. With technologies advancing at such high speeds, it will be astounding to watch people use this as a tool to become a more effective storyteller.

Stories root us. They echo our personal values, culture, and interests—the things we believe in. By producing clean and beautiful visual art through innovative means, we have been able to realize faster and more effective means of communication. The Future of StoryTelling brought together technologies that paint meaningful campaigns by weaving in our imagination with tangible driving facts. The technology presented at this summit by design changes our story-line so that we can work with stronger visual cues, becoming smarter, and provide even more valuable output. I hope that these societal advancements will catalyze people’s relatability with each other, end conflict, and bridge gaps. It will be fascinating to watch people begin to assimilate these new tools into their live and change their own personal stories.

February 24, 2015
As a winner of the Social Media Week annual Scholarship Program, today I had the opportunity to attend Social Media Week, which runs from February 23rd to 27th 2015 at Highline Stages. My first session was "The ROI f WOM: A first look at "WOMMA's Return on WOM" Brand Data study.

What is the true value of word-of-mouth (WOM), online and off, relative to other marketing and media? In 2014, the Word of Mouth Marketing Association (WOMMA) gathered some of the world's leading brands and researchers and launched "Return on Word of Moth," a landmark study to finally answer these questions:How much of a brand's sales are driven by WOM? Does WOM amplify marketing and, if so, by how much?How do the impacts of online and offline WOM compare?What are the best practices for including WOM in the marketing mix models?How do WOM and paid impression compare in their power to drive sales?
Participating Brand and Research Partners:
Beth Rock…
Post a Comment
Read more

June 02, 2018
On May 11, 2017, The One Club for Creativity hosted the Creative Week, one of the industry's leading conferences attracting designers, producers, creatives and marketing executives from all over the world.

George Lois, who many call the “original MadMan”, was the 2017 Creative Summit Main Speaker.  Lois, a pioneer of advertising’s Creative Revolution in the 1960s, is most known for being an art director of a number of controversial Esquire covers that sparked conversation on topics ranging from pop art to college students dodging the Vietnam War draft.  Some of the covers include Muhammed Ali as San Sebastian and Andy Warhol drowning in the Campbell’s soup can that he is most famous for.  Many of the covers were on display along the hotel’s hallways to promote Lois’ new archives that he so generously donated to The City College of New York.  It was through the George Lois “Big Ideas” Archive that I was able to attend this conference.
During his hour long keynote, George Lois recalle…
1 comment
Read more

October 19, 2017
Each year #AWNewYork has a ton of tracks. And multiple sessions per track - times 5 days. Plus award shows and networking. If you’re worried it’ll be too overwhelming, this post might help. In it I’ll share some tips on how to get there, how to choose what to see and do, and how to make the most of the experience.
Take the train Advertising Week often coincides with some UN summit or other. Which means a cab or car sharing service is NOT the way to go. Act like a real New Yorker and jump on the subway – or risk getting stuck in epic traffic.
Wear comfy shoes & layers There’s no way around it – you’ll have to walk all over hell’s half acre. And stand in lines. So put on your cutest kicks. And don’t forget to bring a sweater or scarf for when they crank up the A/C.
Charge up Prepare yourself to be overstimulated because brilliance will be coming at you from all sides. You need to be fueled up to take it all in. The food is sparse and iffy. So bring your refillable water bottle and a few…
Post a Comment
Read more